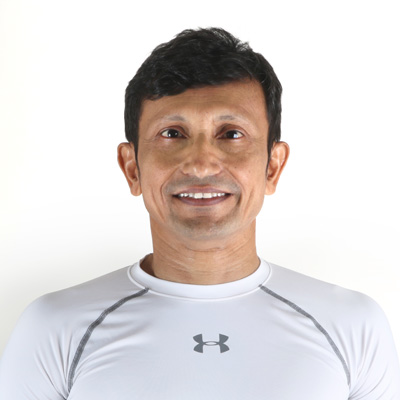 Prabir started learning yoga at the age of 9 and began teaching at 18. His first step into yoga was initiated by his brother and grandfather, both of whom were great Yogis. As a child, Prabir was relatively short compared to his classmates. With the help of yoga, his little weak body grew into a strong and well-developed one. He even challenged himself by entering yoga competitions and won many awards including the “Champion of the Champions” in the All India Yoga Competition, Kolkata in 1985. The benefits he obtained from yoga made him determined to make yoga his lifelong career. In his early 20s, Prabir met his guru Yogacharya Sri Lalit Mohan from Kaivalyadham, Maharastra, India and was greatly inspired by him. Guided by Sri Lalit, he reached a deeper understanding of asanas, pranayama and the importance of Sthiram Sukhamasanam – i.e. when you achieve a posture, it becomes effortless. Prabir knew that yoga was not just about posture because he had experienced its magic before. So in 1990, he completed a Diploma in Yoga Therapy. Since then, Prabir has helped many students and patients through his yoga classes and therapeutic sessions. He is committed to promoting yoga in his professional capacity and developing a yoga culture for everyone. In his more than 30-year career span, approximately 70 of his students have become renowned yoga teachers in Hong Kong, Singapore, Thailand, Taiwan, Vietnam, China, Cambodia, Malaysia and many other countries. Prabir’s classes are rhythmic, with sequences synchronised to his music. His classes are reputable for helping students to develop a balance between strength and flexibility, improve their alignment, and build a healthy mind and body. Prabir believes that yoga, especially pranayama (breathing techniques), can bring harmony to our entire being. So he always reminds his students to respect and listen to their body. Qualification Highlights • President, Jharkhand Yoga Association, 2014-present • “A” Grade Referee – Asian Yoga Federation (Asian Yoga Championship), 2011-present • Joint Organising Secretary of Asian Yoga Federation, 2011-present • Secretary General of Yoga Federation of Hong Kong, 2010-present • Experienced Registered Yoga Teacher (500 hours), Yoga Alliance, USA, 2009-present • Associate Director of Hong Kong Yogathon, 2008-present • Personal Training Certificate in Pilates for Yoga, Planet Yoga, Hong Kong, 2006 • Joint Secretary of Yoga Federation of India, 2000-2010 • Diploma in Yoga Therapy, International Federation for Yoga Sports, 1999 • Diploma in Yoga Teacher Training, Ghosh’s Yoga College, Kolkata, India, 1990 • “A” Grade Referee-Yoga Federation of India (National Yoga Championship), 1989-present • Founder President of Karmakar Institute of Yoga, Jamshepur, India, 1984-present • Grade “A” Teacher’s Training Course in Yoga, Netajee Shubhas National Institute of Sports, Sports Authority of India (Government of India), 1984 • Awarded Tabla “Visarad” and achived First class Diploma in Indian Classical Music from Gandharbha Mahavidyalaya, Mumbai, India, 1984 • Bachelor’s degree in Commerce, Ranchi University, India, 1979 What Prabir teaches • Core • Hatha • Healing • Hot • Pranayama & Meditation • Yin • Yoga Therapy A healing practice focused on rehabilitating the body. Special attention to alignment and detailed instructions are combined with specific asanas with the purpose of bringing the body back to health. Some pranayama, chanting and meditation may be included.
Suitable for anyone seeking to heal their bodies or returning to practice after an injury. A non-vinyasa-based asana practice focused on connecting the body and mind with the purpose of increasing awareness and stability. Some pranayama, chanting and meditation may be included. Suitable for students with some yoga experience looking to have an invigorating experience. No full inversions are included in these classes. Some preparations for inversions and Level 2 postures may be introduced, with options for Level 1 students to ease the transition from Level 1 to Level 2 classes.